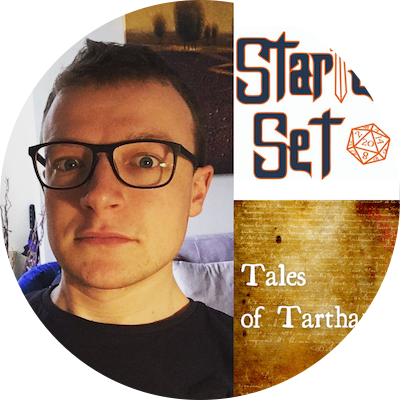 Tales of Tarthage is a D&D inspired crime drama set in the fictional city of Tarthage. The show follows the lives of four members of an Extraordinary Crimes Unit as they investigate a series of murders in the build up to an election. The show examines the human stories and themes of economic struggle, corruption and the war on crime in an otherwise fantastical setting. It draws inspiration from the work of David Simon, Jed Mercurio and JRR Tolkien, as well as real stories from members of the UK law enforcement community. Its second season concluded in December with season three planned for Summer 2022.

Their current published works are the Starter Set Manual of Homebrew Heroes which contains four brand new playable races, and the People’s Republic of Aqualibrium Map which allows players to set their own adventures in the city homebrewed during the Making a Metropolis series on Starter Set.

Ed and Sam will be producing a new series of podcasts about the upcoming Marvel Multiverse Tabletop Roleplaying Game in 2022 which will include an explainer show breaking down the game’s mechanics, and a Let’s Play podcast series.

Minor Spider-Man: No Way Home spoilers in this episode! I'm joined by Sam Bradley from Starter Set Studios to talk all how to tell, or be told, a good story. We dissect a couple of common storytelling tools such as 'show, do…