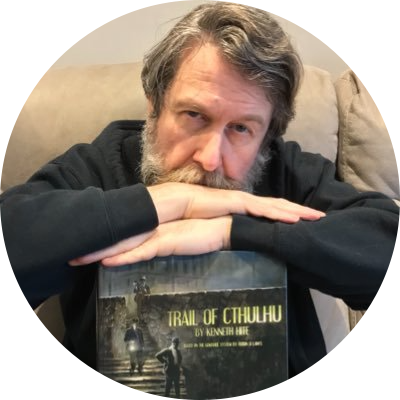 RPG gamer & DM/Keeper (D&D, CoC, etc.) since 1979. Painter and now manufacturer of miniatures (Morgue Miniatures). Biker, Cook, Cat lover.
Started from collecting 28mm Napoleonic wargaming miniatures to then collecting Middle Earth miniatures when I discovered pocket games called Melee, then Magic which lead to an RPG called The Fantasy Trip. Very soon after that I purchased Basic Dungeons and Dragons, which had The Keep on the Borderlands. A year after that I went into AD&D. The following RPGS were in order: Call of Cthulhu and Runequest, then D&D 2e, D&D 3e, D&D 4e and D&D 5e. Around 2009 I played Fiasco and discovered indie RPGs. Around this time I started helping out at my FLGS (Leisure Games), where I work at conventions such as Salute (biggest wargaming convention in Europe) and Dragonmeet. In 2010 I fell into working as a Background Actor for film & TV which I still do to this day. I started a very small RPG miniatures business in 2017, Morgue Miniatures. We make specialised miniatures rather than standard miniatures in attack poses or holding swords. Our small ranges are very suitable for D&D and more specifically 1980s minis for contemporary RPG such as Tales from the Loop, Kids on Bikes.

These days, with my film & TV work, working as back-up/convention staff for Leisure Games and running a small miniatures business with my wife, I’m very happy.

This episode, Fabio Vollono of Morgue Miniatures takes us on a trip through time and all the varied & fantastical incarnations of Dungeons & Dragons. Edition by edition, we discuss how the game has changed over the last 30+ …